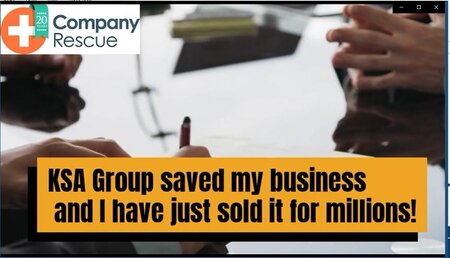 Administration to protect the company, followed by a company voluntary arrangement (CVA), paying 100p in £1 for all creditors. Followed some years later by our client selling for millions!

Murray Duncan approached KSA Group 10 years ago when his company, Paralaw Limited, was facing severe financial distress and cash flow pressure. This had resulted in a substantial liability accruing with HMRC. HMRC was in the process of taking enforcement action and was in the process of issuing a winding up petition.

KSA's Insolvency Practitioner, Wayne Harrison, said , This was one of those familiar situations where a successful company experienced a difficult financial situation that would have resulted in the company being wound up had it not been for our intervention. We worked closely with Murray, his team and clients and we were all able to save the company, pay all creditors in full and return it back to Murray's control. Since then, Murray and the company have gone from strength to strength and recently Murray sold the company for a substantial sum. We, at KSA, are all extremely proud that we were able to help Murray save and then turn around the company's fortunes.

Murray said: “At all times during this stressful period KSA were brilliant at ensuring that the strategy was clear, well communicated, and we were aware of what was happening at every step of the way. The administration period allowed us to carry on the business and place it on a stable footing. The CVA gave us time to pay the HMRC arrears in full over a reasonable period. In fact, the new systems we put in place during the Administration were so strong that they became the platform upon which Paralaw could grow significantly over the next 10 years, leading to the sale of the company to a large US investor for many millions managed by the original accountants. So, I owe my company’s survival, and ultimately its successful sale, to KSA Group’s team and their friends at Insight Associates.

So, if you a worried about your business and facing cashflow pressure there are solutions! Call KSA Group on 0800 9700539 if you want to save your business. Who knows you may be able to sell it later for millions! In fact many of our clients have gone on to be very successful and they are happy to give references. Ask us about this.

Categories: What is a CVA or Company voluntary arrangement?, What is administration

How can we help?

We have numerous guides of options you can look into to help...download our CVA experts guide here or view our pre pack page.  If you feel you must close down permanently then see our guide here on liquidation. If you are in the hospitality industry we do have a rescue guide, not specific to the current situation but still relevant.

We also have a full 80 page worried directors guide which you can now download for free.

Meanwhile, if you have any serious concerns about cashflow then you can make use of some of our tools for free. Prepare a cashflow forecast using our template here, regularly updating it as this will help wish cash planning.