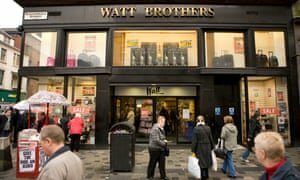 KPMG’s, Blair Nimmo and Alistair McAlinden, are the appointed administrators. They will work with the remaining 77 employees to sell-off the company’s assets which include stock and property. The administrators are actively investigating if the early sale of some of the business and its assets can be secured.

The fourth-generation family-owned firm has been going since its incorporation in 1915, selling a range of branded electrical, homeware and fashion products.  It also has a further 10 leasehold stores across central Scotland.

From as soon as Saturday, a stock clearance event begins in its flagship store in Glasgow.

It was only in 2018 that the chains turnover increased year on year, peaking at around £24 million. Though the increased revenues failed to result in increased profits, leaving a strain on financial performance of the firm, also worsening by the rising competition from online and new discount retailers.

Following the continuation of trading losses, in 2019 Watt Brothers attempted seeking new investment. Unfortunately, this was unsuccessful, hence the decision to appoint administrators.

Blair Nimmo said: “Despite the director’s tireless efforts to increase margins, cut costs and recapitalise the business, Watt Brothers continued to incur trading losses as a result of the well-publicised challenges being experienced across the retail sector.

“Ultimately this has led to the unfortunate demise of a well-known and highly-regarded business.

“We will be holding a stock clearance event and are grateful to the remaining staff for their efforts and assistance at this difficult time.

“We are working closely with Skills Development Scotland, via their Pace team, and JobCentre Plus to support the staff who have been made redundant.

“We would encourage any party who has an interest in acquiring the business and its assets to contact us as soon as possible.’’