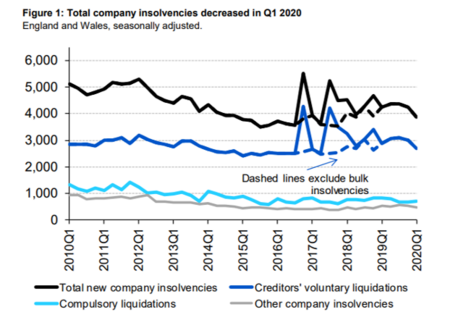 The insolvency statistics for Q1 2020 (England, Scotland and Northern Ireland) have been released. You can access the full publication here but in this article we provide an overview of the key findings.

The latest insolvency statistics, for Q1 2020, January to March show that in total there was a total of 3,883 company insolvencies. This figure has decreased by 8.5% compared to that in Q4 2019 and in the same quarter in the previous year.

When looking deeper, the overall statistic is made up of 2,708 Creditor’s Voluntary Liquidations (CVLs), 701 Compulsory Liquidations, 404 Administrations, 69 Company Voluntary Arrangements (CVAs) and just one receivership.

The trend of CVLs driving overall company insolvencies continues. However, for all other insolvency mechanisms, excluding compulsory liquidations, a decrease was seen compared to the previous quarter.

Compared to Q4 2019, administrations decreased 13%, CVLS decreased 10% and CVAs also decreased 10%. As for compulsory liquidations there was a 1% increase.

As for the liquidation rate, this fell in the 12 months ending Q1 2020 to 40.7 per 10,000 active companies in England and Wales (excluding bulk insolvencies).

When looking by sectors, construction remains the industry with the highest number of insolvencies (3,077) in the last twelve months ending Q1 2020. The industrial grouping, Wholesale and retail trade, repair of vehicles followed with 2,360 insolvencies and the accommodation and food services grouping had 2,317.

Overall, there were 235 company insolvencies in Scotland for the first quarter of 2020, this being a decrease of 14.5 per cent compared to the same quarter of the previous year.

This figure is made up of 137 compulsory liquidations, 77 CVLS, 20 administrations, one CVA and no receiverships.

The majority of company insolvencies in Scotland are compulsory liquidations, compared to England and Wales which has a majority of CVLs.

For Northern Ireland, figures show an overall of 83 company insolvencies, this being a decrease of 26 per cent compared to the same quarter of the previous year.

Obviously, the majority of these insolvencies were not as a result of Coronavirus as they only go up to the end of March and any closures, due to the lockdown, would not have really shown up due to reporting timings and the inablity of some filings to be made in the last week of March.  It does at least show that the economy was in a good state prior to the crisis and which should aid our recovery.

The second quarter figures will make for interesting reading.  At the moment the economy is in a sort of deep freeze with little activity.  We have noticed an increase in liquidations over the last few weeks but this appears to be petering out. Creditors actions such as winding up petitions have been delayed until June so compulsory liquidations will be low in Q2.  The effects of the pandemic crisis won't be seen in the statistics until Q3 or Q4 most likely.

Categories: What is Creditors Voluntary Liquidation CVL, What is administration