A further 57 stores to be saved for Monsoon Accessorize 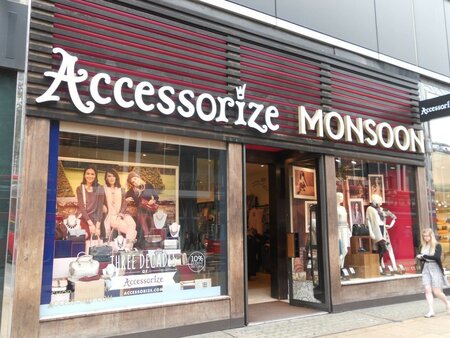 It has been reported that Monsoon Accessorize have revealed a further 57 stores will be saved after landlords agreed to move rent deals to be based on turnover.

Originally, when founder, Peter Simon’s, Adena Brands bought the retailer out of administration, the plan was to reopen just 100 stores. Now it looks likely that 157 will operate, saving 2400 jobs.

For now the stores remain under the control of administrator, FRP Advisory.

Monsoon Accessorize has had its future secured as founder, Peter Simon, leads a buyout from Adena Brands Ltd, a company he ultimately controls.

The buyout deal covers the retailer's brands and intellectual property, head office and design teams and the group's distribution centre in Northamptonshire. A £15 million cash injection by Simon is also included.

Talks will now be held with landlords of Monsoon and Accessorize's 230 stores. Around 100 look to be rescued.

It is understood that 545 job cuts and 35 store closures have occured immediately.

Monsoon becomes the latest fashion retailer to hit the news for being on the brink of insolvency amid the coronavirus pandemic.

The group, owned by Peter Simon, is said to be planning to file a notice of intention to appoint administrators within the coming days. One source reports that a move could take place as early as Friday, with FRP Advisory lined up to handle the process.

A sale of the business has been ongoing for the past two months and talks with a small number of prospective buyers continues. Mr Simon is said to be planning to lodge a bid to buy back a restructured version of the business if it falls into administration. Mr Simon is also expected to write to the company’s landlords to seek a rent-free deal, enabling some of its stores to survive a period of deep uncertainty and to emerge from administration. If landlords refuse the deal it is likely these stores will be closed.

In line with what other high street retailers have been following, due to government measures, Monsoon Accessorize’s 220 UK stores have been closed since March.

The company is not a stranger to restructuring deals…less than a year ago it received approval from landlords for a Company Voluntary Arrangement (CVA). The CVA included 135 of its shops having their rent bills cut and 40 being permanently closed. Some of its landlords did argue for a better deal but eventually they halted any plans to appeal. Mr Simon also injected £12m of his own capital to the company as a part of the CVA, but this money has now of course been used.

A person close to Mr Simon said he remains passionate about seeing the business survive.