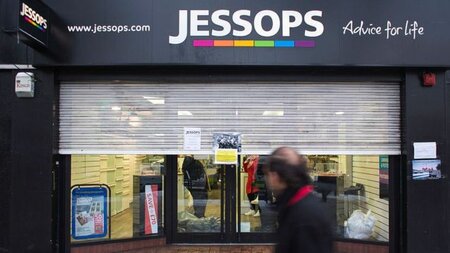 In 2013, Dragon, Peter Jones bought Jessops out of administration, saving almost 1,500 jobs and relaunching just two months after its collapse with a £4m investment.

It is now reported that Jessops is in need of saving again as rumours say Jones is looking to cut costs by renegotiating rents and closing the loss-making stores of the 46 outlets the chain has. If this is done, 500 jobs will be at risk.

This is not the first time Jones has considered a restructuring. In October there were warnings of calling in the administrators.

Advisory firm, ReSolve were the appointed administrators to JR Prop earlier last month after there was a notice of intention to appoint filed.  Mr Jones managed to secure a two-week extension whilst he tries to secure a deal with interested parties.

Despite the uncertainty of the future for the store estate business, Jessops Europe, the holding company is not to be affected by the administration with Jones happy to keep this aspect of the business going.

The most recent accounts from Jessops Group, parent company, show that the groups sales slumped 11% in the year to the end of April 2018, with underlying earnings rising by 31%.

The high street has become a tough field the past few years where we have seen a number of high street chains collapsing due to the lack of customer spending and the switch to online shopping. Most firms in this position seem to call in administrators or be forced to restructure amid rising costs. Take Clintons, for exampl,e who moved to a pre-pack administration earlier this week.