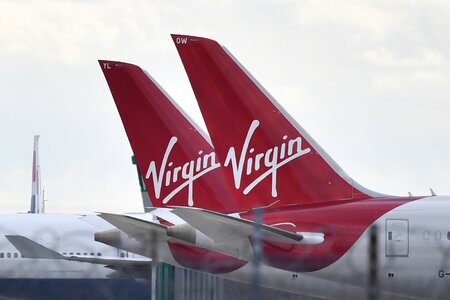 Virgin Atlantic Airways is in talks with shareholders and creditors about a further £160m support package just six months after securing a £1.2bn rescue deal.

A deal over new funding is close to being finalised, expected to be announed next week.  Rumours say a £100m loan from Virgin Group, the airline's majority owner, will be involved.

This all comes as the Government rule out any returns to international travel, at the critical period of Easter. This brings more pressure and trouble for the aviation sector.

After its creditors backed its £1.2bn rescue deal, Virgin Atlantic Airways is reportedly preparing to cut more than 1000 jobs as it faces a slower-than-expected recovery in demand for international air travel.

UPDATE: Its creditors back the rescue plan which will secure its future for at least the next 18 months. Shareholders, banks, aircraft owners and suppliers of which are owed money are among those who backed the plan. Now approval is needed from the High Court in London - to commence 2 September.

After Virgin Atlantic Airways unveiled a £1.2 billion rescue package in July, judgement day has come, since the deal is placed infront of creditors and investors whom have to give their approval in the High Court hearing today.

Though the firm is "fundamentally sound", a restructuring and fresh lot of cash injected is crucial - according to its lawyers. If the rescue plan is not approved, the airline looks likely to run out of cash by the end of September.

Virgin Atlantic Airways unveils a £1.2 billion rescue package which immediately secures its future and saves many jobs in the British aviation sector.

After speculation yesterday, First Data backed the deal, making onerous demands relating to cash collateral. Now backing has been secured, it makes the company one of the first to use a new court-sanctioned process introduced as part of government reforms to enable a smoother corporate restructuring process amid Covid-19.

Shai Weiss, the airlines CEO is confident the deal will ensure "Virgin Atlantic can emerge a sustainably profitable airline with a healthy balance sheet." He also pledged to win back trust of customers.

The deal must be accepted by creditors, this summer, for the deal to be complete.

This weekend, Virgin Atlantic are trying to secure a £1 billion rescue deal with First Data.

If the giant American payment group back the deal it could save thousands of jobs in the British aviation sector. First Data have demanded stringent terms in return for its endorsement of refinancing.

Sky News has more on the topic.

Virgin Atlantic Airways is racing to stitch together a £900m privately funded rescue deal within days after concluding that it was unlikely to secure an emergency government bailout. Sky News report more.

Restructuring specialist, Alvarez & Marsal has been appointed to prepare for the potential insolvency of Sir Richard Branson’s Virgin Atlantic Airways.

Contingency plans are in place, with options being looked into, focused around a pre-pack administration which would see a restructured and financially viable carrier emerge from the COVID-19 crisis. A pre-pack would also see the equity of existing shareholders; Sir Richard Branson’s holding company and Delta Air Lines, wiped out.

Virgin Atlantic’s board is in discussions with the government and private investors about providing new capital which would allow the restructuring plans to be implemented. Ideally, a £500m rescue deal needs to be secured. Chancellor Rishi Sunak states support would only be given as a ‘’last resort’’.

Though A&M has been appointed it does not mean insolvency is inevitable it just reflects the legal obligation of the companies’ directors to prepare for the potential outcome.

This comes after the struggling airline said it would axe more than 3,000 jobs in order for it to survive. Additional plans for survival include ending its 36-year residence at Gatwick Airport, reducing its fleet size and putting its Boeing 747s into early retirement.

Mr Branson himself made an impassioned defence of his group’s financial affairs, warning that the transatlantic airline, founded in the 1980s, was near to collapse if no government support was offered.

Already he has seen Virgin Atlantic fall into a voluntary administration, leaving thousands of jobs at risk.

‘’We continue to take decisive action to reduce our costs, preserve cash and protect as many jobs as possible. Discussions with a number of stakeholders continue and are constructive, meanwhile the airline remains in a stable position. Virgin Atlantic is committed to continuing to provide essential connectivity on competitive terms to consumers and businesses in Britain and beyond, once we emerge from this crisis.’’