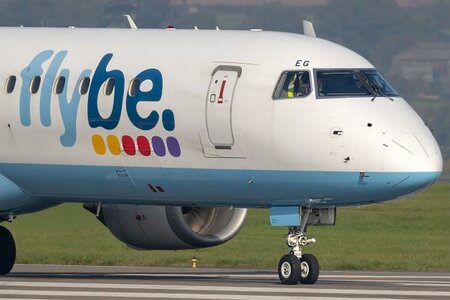 UK airline Flybe collapses into administration after a bid for additional financial support failed. 2,000 jobs are at risk.

Joint administrators, Alan Hudson, Joanne Robinson, Lucy Winterbourne and Simon Edel of EY have been appointed as the airline ceased trading immediately.  This follows crisis talks on Wednesday in hope of securing a rescue deal, but such talks were unsuccessful.

It is thought that coronavirus is to blame, with the outbreak lowering the demand for air travel. According to a company insider, the impact of the virus on the travel industry ‘’made a bad situation much worse’’.

Its website displays a message for customers advising them not to travel to the airport unless an alternative flight has been arranged.

It was only in January that the carrier avoided going bust. They were bought by a consortium including Virgin Atlantic. The consortium had planned to pump £30m into the business to keep it afloat but ended up appealing to the government for additional support.

The company were hoping for a £100m lifeline and changes to Air Passenger Duty taxes.

Air transport expert, John Strickland said the regional market was challenging for any airline, but Flybe in particular made the matters worse following over-ambitious expansion.

‘’Despite every effort, we now have no alternative – having failed to find a feasible solution to allow us to keep trading. I am very sorry that we have not been able to secure the funding needed to continue to deliver our turnaround.’’

‘’We are working closely with industry to minimise any disruption to routes operated by Flybe, including by looking urgently at how routes not already covered by other airlines can be re-established by the industry.’’

Customers have already began sharing their devastation. One customer stressed how it would not just be bad for the customers and staff but also the areas of which it served. Its scale in the UK market as a whole was small but it was one of the only choices for customers who wished to fly from Exeter, Newquay or Southampton. Other larger airlines do not tend to fly to the smaller airports.

The collapse of an airline means planes are grounded and all flights are cancelled. In this circumstance, all those by Flybe and sister airline Stobart Air have been cancelled.

Rory Boland, travel editor for consumer group Which? said Flybe’s passengers are unlikely to have ATOL protection meaning they would not automatically be flown home or given a refund as their flights would not have been booked as part of a package.

As he explained, many travel insurance policies do not actually cover for airlines going into administration. However, some customers would be protected by their credit or debit cards. Also, those who had a flight with a codeshare partner can claim their cost back via that airline.

Anderson stated, ‘’The UK has lost one of its greatest regional assets. Flybe has been a key part of the UK aviation industry for four decades, connecting regional communities, people and businesses across the entire nations.’’ All partners and communities the airline have served along with the team itself have been thanked for their commitment and dedication.

After a day of talks with the governmental departments, the Government has agreed a rescue plan for Flybe.

Ministers have agreed to work with the regional airline to arrange a repayment plan of its £100m tax bill. As well as this, the firm's owners, including shareholders Virgin Atlantic and Stobart Group, have agreed to pump more money in. This deal aims to keep the company operating, much to the benefit of its 8m customers and 2,000 employees.

The Government has also promised to look further into the current air passenger duty that is levied on domestic UK return flights, which added to the airlines losses.

Business Secretary, Andrea Leadsom, says how delightful this news is.

Flybe Boss, Mark Anderson remarks how the outcome is positive and allows ''focus on delivering for our customers and planning for the future''.

Sky News reports that regional airline, Flybe are seeking a buyer to secure additional finance, in order to avoid collapse.

Late on Sunday night, the airline tweeted: "Flybe continues to provide great service and connectivity for our customers while ensuring they can continue to travel as planned. We don't comment on rumour or speculation."

Flybe handle over half of Britain’s domestic flights outside London, operating around 75 aircraft and serving more than 80 airports across UK and Europe. It flies around 8.5 million passengers each year to 170 European destinations.

Accountancy firm, EY, have been put on reserve to handle groups possible administration. 2000 jobs are at risk and without a rescue deal, it would become the second major airline to collapse in four months, following the collapse of Thomas Cook Group last September.

A source close to Flybe said that the Department for Transport and Department for Business, Energy and Industrial Strategy had been working to determine if the Government could provide any emergency finance to the company. However, it remains unclear how any rescue financing involving the Government may be structured.

Just last March, the troubled carrier was rescued by a consortium, known as Connect Airways, consisting of Virgin Atlantic, Stobart Group (which owns Southend Airport) and Cyrus Capital Partners. The three bought Flybe for a nominal price of £2.8m, acquiring its assets and operations. They promised to pump tens of millions of pounds in to keep the loss-making airline afloat. There was plans to rebrand the airline as Virgin Connect later this year, with the route network being adjusted to increase its connections with Virgin Atlantic services from Heathrow and Manchester. However, it is said that the proposals were more onerous, hence the airline being left on the brink of collapse.

This is not the first time Flybe have seen red. Just a year ago they came close to an outright collapse, amid a takeover battle that left shareholders fuming that their equity had been left worthless.

In Autumn 2018, a formal sale process was launched, with a toxic mix of a volatile currency, rising fuel costs and Brexit uncertainty said to be the blame.

Industry price wars has also been named a factor of concern for airlines and their financial performance in the last few years.

The Department for Transport decline to comment, as did EY and Stobart Group.

Passengers are advised to arrive as normal.