Fastest decline for the UK Construction Industry in a decade 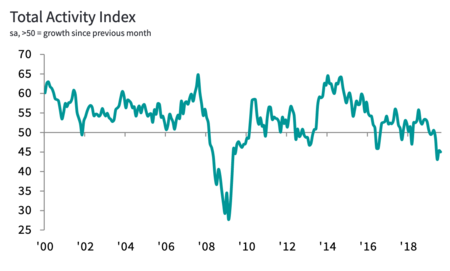 Today, we see the overall statistics of the PMI study released, attached with a comment from Chief Business Economist of IHS Markit, Chris Williamson - read for yourself here and see the following for additional, updated information to our post yesterday.

The report explains that many firms had noted a boost in overseas sales, since the sterling exchange rate weakened. However, this was not for all European clients, as some had delayed comitting to projects due to the political uncertainty.

The strain of business capacity had reduced since numbers of employment rose alongside a decline in new business growth.

The survey highlighted how there was intense competition for new work, leaving prices charged by service providers at its slowest pace for just over three years.

Overall...Business optimisim is failing and affecting our economy.

In worrying news for the UK economy, new data from the HIS Markit and the Chartered Institute of Procurement and Supply shows that the UK construction industry dropped at its fastest rate in 10 years.

In August, the PMI figure was down to 45 for the overall output of the construction industry.

The purchasing managers index (PMI) measures the direction of economic trends. For industries with figures above 50, they experience growth whereas for those below 50, a decline in trading is seen.

Overall, the survey showed UK manufacturing to be crashing to its worst levels of performance in seven years. Not only this, but it was found that house price growth had halted – another warning sign for the British economy.

Duncan Brock, CIPS group director discussed how the continued uncertainty and a weakened UK economy led to this contraction of construction activity.

‘’Inevitability business confidence followed suit, dropping like a brick to its worst since December 2008 and close to the lowest depth in the previous recession.’’

‘’The commercial sector particularly has been devastated by reluctant clients fearful of taking a wrong turn in a confusing landscape and delaying project starts, resulting in the fastest drop in new orders since March 2009’’.

Tim Moore, economics associate director at HIS Markit, explained how the current political crisis was holding back activity since clients showed rising levels of risk aversion.

‘’This provides an early signal that UK construction companies are braced for a protracted slowdown as a lack of new work to replace completed contracts begins to bite over the next 12 months.’’

Contractors margins are being squeezed, as confidence in their business is lost. Funds are available for projects and falling mortgage rates this year should push up demand for new homes, yet Brexit risks are delaying any activity.