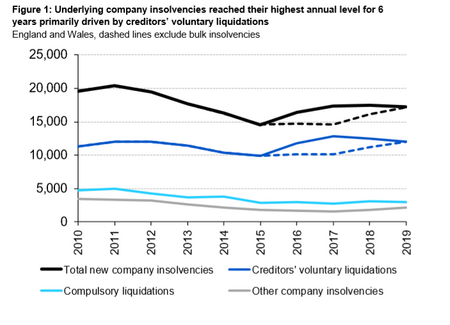 The insolvency statistics for Q4 2019 (England, Scotland and Northern Ireland) have been released. You can access the full publication here but in this article we provide an overview of the key findings.

Analysing the statistics of other insolvency tools, compulsory liquidations decreased by 5.4 per cent to 2,970 and company voluntary arrangements remained flat at 351. Alike 2018, there was just one administrative receivership in 2019.

CVLs now represent 70 per cent of all underlying company insolvencies, with compulsory liquidations representing 17 per cent, administrations 10 per cent and company voluntary arrangements being used by just 2.0 per cent of insolvent companies.

In Q4, compared to Q3, the amount of underlying company insolvencies had decreased by almost 2 per cent, yet compared to the same period last year, it is up by 8 per cent.

Compulsory liquidations were particularly impacted since they fell for the fourth successive quarter. When comparing the other insolvency tools, there was less of a difference between Q3 and Q4.

When looking at the split of total insolvencies in the 12 months ending Q4 2019 across the different industries: construction, wholesale and retail trade, repair of vehicles and accommodation and food service were the most hit – following the trend from the previous quarter.

The results so far are relating to England. Now we look at the statistics for Scotland and Northern Ireland.

The majority of these were by form of a compulsory liquidation (160), or creditors voluntary liquidation (80). There were 19 administrations and no company voluntary arrangements or recieverships.

Northern Ireland saw 111 company insolvencies in Q4 2019, an increase of 56.2 per cent compared to the same quarter the year before.