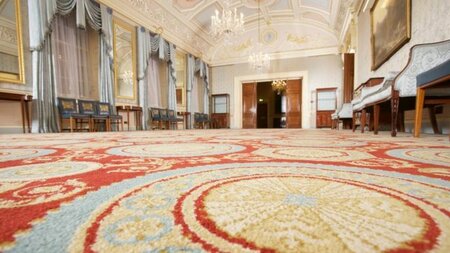 ACL Carpets rescue Axminster Carpets from administration. Former owners, the Dutfield family, are a part of the group of investors behind the company, who have bought out the royal warrant holder, sold as a going concern. The purchasing entity are expected to change the name back to Axminster Carpets in the future.

Despite building up debts of almost £8m, the company are believed to now be debt free.

Its head office site and manufacturing facility in Axminster will continue to be the basis for operatations.

Robert Day, leader of the private investors remarked: ''The business has never been in a better position to again become a significant player in the sector.''

Benjamin Wiles, joint administrator of Duff & Phelps said: ''We are absolutely delighted to be able to announce today that we have secured the future of Axminster Carpets, one of the best-known British brands, following the successful sale of the business and assets of the company.''

Axminster Carpets has called in Duff & Phelps as administrators after weeks of trying to secure a rescue deal.

Sources say that Axminster’s underlay-manufacturing division has been sold to rival Ulster Carpets, while its shop has been offloaded to another competitor, Wilton Flooring. As for the main carpet-making business, no buyer has been found as of yet.

Almost all of the companies 90 staff have been made redundant with only a handful left to fulfil its existing order book.

‘’The administrators have had to come to the decision that the best possible option for maximising the realisations for the company’s creditors was the immediate sale of its underlay business to Ulster Carpets and the redundancy of the majority of the existing workforce.’’

All potential options for all or part of the remaining business and assets are continuing to be explored.

265-year-old, Axminster Carpets filed a notice of intention to appoint administrators, following it being on the brink of collapse. A buyer is being sought to try and avoid administration and the loss of 90 Devon-based jobs.

This follows the company being hit by a fall in orders due, in part, to the slowdown in the awarding of rail franchises – an important source of its sales.

Administrators at Duff and Phelps are on standby as the company tries to steer away from its second collapse in seven years. In 2013, also overseen by Duff and Phelps, the company was rescued by a consortium led by private investor, Stephen Boyd. It was one of the largest private employers of the county, with 300 jobs lost from its 400 at the time.

In 2016, H Dawson Wool, a Bradford-based supplier to the carpet manufacturing sector took over.

In September 2019, boss Jonathan Young warned a difficult trading period for the firm, offering voluntary redundancies and impending job losses. He explains the company’s problems were due to the sustained uncertainty generated by Brexit, causing a lack of consumer confidence.

Despite needing to find a buyer, Young remains confident as he is ‘’encouraged by the level of interest in investing in our brand’’, it being a ‘proud British manufacturer’.

The origins of the luxury carpet maker can be traced back to Thomas Whitty, who began making carpets and rugs in his home town of Axminster in 1755, using what is known today as the Axminister method of weaving. The first carpets were bought by the likes of royals, including King George III and Queen Charlotte.  Despite going out of business in the 1830s, the family firm was re-founded by Harry Dutfield in 1937, when he revived the tradition.

The company have its products at home in Buckingham Palace, Windsor Castle, The Royal Albert Hall and Clarence House to name just a few.