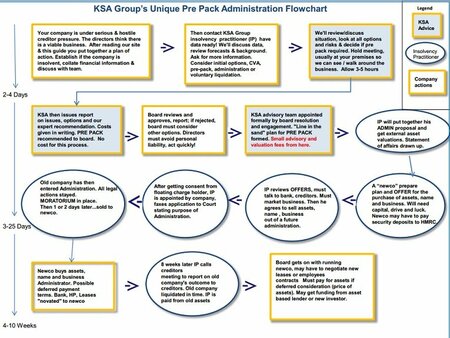 What is a pre pack liquidation? Is it where you can sell the assets of the old company and start a new one debt free?

A pre pack liquidation is essentially a business asset sale at the same time or after the liquidator has been appointed. TUPE and SIP16 do not apply to pre-pack liquidation BUT there is no moratorium and protection prior.

A pre-pack administration is the process where an agreement is reached to sell the assets and business of a stricken company to a buyer, or the former owners, and the company is actually put into administration "oldco". The "newco" then carries on trading and the business is preserved. Eventually the "oldco" may be liquidated so this might be the reason that people get confused.

The other possibility is that they are referring to a phoenix company. This is where the business is not viable and the company is put into liquidation via the normal route of a CVL - However, the directors have set up a new company at almost the same time and the assets have been sold to them so they can continue to carry on trading. They will have had to buy the assets at fair value and there are restrictions on reusing the old company name. Section 216 of the insolvency act is the relevant section. A pre pack administration is a more complex procedure and is more suitable for larger businesses as the process is all done in one move with the associated legal costs and regulatory requirements put on the insolvency practitioners. A phoenix is not a process in itself but simply a liquidation followed by a start up company that happens to be making use of the assets of the liquidated company. It is also referring to where the owners of the new business are the same directors of the liquidated company. In a pre pack the business is often sold to a completely unconnected party.

A PPA, where the assets are sold to the previous directors or indeed a phoenix company, will often be required to pay a VAT or PAYE deposit to HMRC as in their eyes they have to protect their position. Of course this only really applies if the previous company owed significant sums to HMRC.

Before embarking on any type of transaction based insolvency procedure ie selling the company's assets to a new company, with the hope of liquidating/putting into administration the old one, it is essential that you take legal advice. If the any assets are deemed to have been sold at an undervalue any subsequent liquidator can reverse any such transaction. Call us on 08009700539 and we can explain the process to you.

Worried about poor cashflow? How to win new work? How to pay wages on pay day? For expert advice on a range of issues download our free Ultimate Guide For Worried Directors today. Or just call us on 0800 9700539

Please note that the guide was written pre Covid-19 and there are some likely changes to insolvency rules regarding wrongful trading.  Please see this page here.​​​​​​​