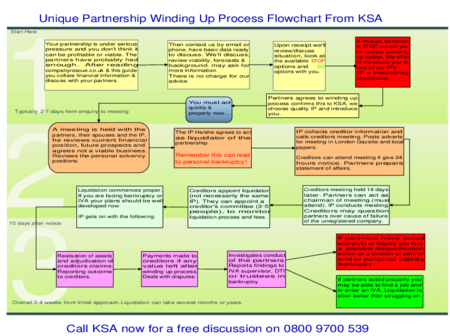 What is a Partnership Winding Up?

This is similar to the liquidation of a company.

When the partners have decided that the partnership has no viable future or purpose then a decision may be made to cease trading and wind up the partnership. Clearly such a decision should not be taken lightly and we would recommend that all other options are carefully considered and compared to the objectives of the partnership and the individual partners.

There are two basic ways that the partnership can be wound up: the creditors petition and a partners petition

The partnership is treated much like an unregistered company and is wound up in the same way as a company. The tasks of the liquidator are therefore to;

It is usually preferable to allowing creditors to wind the company up. Common sense dictates that allowing creditors to initiate such proceedings indicates to creditors and the liquidator that the partnership /partners have failed to act in the best interests of the body of creditors as a whole. Many people in companies or partnerships are told by accountants or advisors to just cease trading and "let someone wind the thing up". In our opinion this is very poor advice. We always recommend taking decisions to ACT.

The Advantages of Winding up

By initiating such action themselves the partners as individuals may avoid the disqualification of the partners and as company directors, however this will depend on their actions pre-failure and whether they had acted at all times correctly and in the creditors interests.

The creditors will know that an insolvency practitioner must be appointed where the winding up process is used. This can ensure (sometimes) a better return, investigation into the officers conduct pre-insolvency and the knowledge that the partnership will not increase debts.

In rescue and restructuring work the partnership can quickly terminate leases and contractual liabilities.

Disadvantages of Winding up

As in all liquidations the assets of the business can be much less than if the business continued. Such insolvency "meltdown" frequently disappoints officers of companies or partnerships because the believe that the values are much higher than can be achieved at, say, a liquidation auction. Add to this the crystallising of claims such as landlords lease liabilities, HP, lease contracts and employee claims and the overall debt position can actually increase.

Winding up can be a very expensive process and the cost of the work undertaken can be recovered from the assets of the business if there are sufficient funds to do so. But if the assets are insufficient (especially after a meltdown) the partners themselves must make up the fees and costs shortfall.

From the partners perspective winding up can lead to their personal bankruptcy if they are called upon to make good the deficiencies of the partnership. They can also be disqualified if the liquidators investigation uncovers misfeasance or mis-conduct and they cannot re-use the trade name of the partnership for up to 5 years.

Most creditors are unlikely to see any real dividend unless the partners can make up the shortfalls. But if a rescue plan (such as simultaneous individual voluntary arrangements (SIMIVA) partnership voluntary arrangements (PVA) or partnership administrations (PA) is used they may see higher returns and continuance of trade in the future which can be equally important to receipt of debts.

Before deciding to wind up the partnership please review all the contents of this site and take advice from either an insolvency/turnaround practitioner in your area or call us on 08009700539. Or email us with your basic details and we will call you back at an agreed time and in confidence.