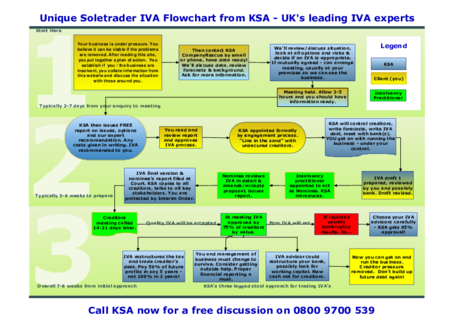 An individual voluntary arrangement is a formal deal made between an individual (who is in debt) and the lender or business. Often a sole trader can use an IVA to help reorganise debt and restructure the business.

If, as a sole trader, you can’t pay tax payments when they fall due, the business is insolvent or under financial pressure. An IVA could be the best solution.

An IVA allows the sole trader to make debt repayments on a regular basis over a number of years, helping combat his or her debt problems in a realistic way which they can afford to pay. It is more beneficial to creditors than other methods, like bankruptcy, as debt will be repaid over time. With bankruptcy, creditors might receive nothing. Think of it this way; if you are owed money by someone and they ask for time to pay it, wouldn't you probably agree? Now, if they said that they had a problem and they want to pay you say 25p in the £1 or they will have to go bankrupt and you would get 0p in the £1, which one would you agree to?

My business is viable, can I go into an IVA?

Yes, if your business is viable or you have disposable assets that can be turned into cash, you can enter an IVA.

If the business has never made profit and sales aren't increasing enough to cover overheads, an IVA is not suitable as the business isn't viable. You should close it as soon as possible and start bankruptcy proceedings. You may be able to arrange a deal with creditors if assets can be sold or liquidated to recover debt for creditors.

A guide to IVAs

See our flowchart of the IVA process.

When a business is struggling, it can be difficult for sole traders as it is the individual who is liable for the business debt, much like partners in a partnership. If problems aren't dealt with straight away, debt can build up and there is a real risk of bankruptcy.

For most small businesses, it is not uncommon to suffer from undercapitalisation and lack of finance. Often, there will be only be a few big contracts and if one is suddenly lost, this can put huge financial pressure on the business. Once cashflow begins to suffer, the problems are harder to manage and more time will be spent with worried creditors, giving you less time to focus on marketing, sales and general running of the business.

If this sounds familiar, you need any more information, or specific questions answered about IVAs, contact us on 0800 9700 539. We can talk you through, free of charge.

If you wish to go into an IVA, you’ll need to prepare some information first, including a list of ALL of your creditors and a list of all of your assets (with estimated values). Ensure you provide estimates of the debt you owe to each creditor – this information will be used in the IVA proposal.

Advantages of an IVA

Disadvantages of an IVA

For an IVA, you will need to appoint an advisor or a nominee to prepare the proposal. They will deal with all creditors and collect all necessary information to go forward. In essence, the nominee will take all creditor pressure away which can be a huge relief to clients.

If you employ an advisor, you will eventually also need a nominee (nominated supervisor) as you need a licensed insolvency practitioner to present the proposal at court. He or she will review the proposal and if satisfied, will act on behalf of the sole trader and file it at court as well as send it to creditors.

While you can write the proposal yourself, it is best to seek advice and assistance from insolvency advisors as there are complex legal processes involved. The final proposal must show realistic cashflow, sales and cost figures with no high expectations of future sales or contracts. Problems won’t be solved immediately so expect a tough year ahead. Don’t make any promises you can’t keep and don’t make large payment, this could backfire and put you in a worse position. Remember, it’s a marathon, not a sprint.

Along with the above, the proposal will need to include reasons why the business is insolvent and how creditors will be repaid as well as how much. Creditors will need to see a statement of affairs (known as SOFA) within the proposal to help them make a decision. This document includes all financial information and figures, giving an accurate account of the business’s position. The SOFA would also include details on the expected outcome of an IVA compared to other options, like bankruptcy.

Once everything is prepared, the proposal can be filed at court. It will be circulated among creditors at the same time a moratorium is applied. This protects the sole trader against legal actions during the process up until the creditors’ meeting (which takes place a minimum period of 14 days after the proposal has been posted to creditors.

The moratorium or interim order can be applied before the proposal is completed or at the same time the proposal is filed (known as concertina application). The latter is often the most efficient method.

As mentioned above, creditors have 14 days to consider the proposal and to put forward any objections or concerns before the creditors’ meeting. At this meeting, the proposal can be questioned and modified as the nominee and creditors see fit.

An IVA can only go ahead if over 75% of creditors (by value) accept the proposals by vote or proxy. Debt of the creditors is added up and each creditor has a vote according to the amount of money he or she is due from the debtor. Please see the example below:

Example of Voting at an IVA Creditors' Meeting

Note that creditors can appoint a different insolvency practitioner to the one nominated by the sole trader if they wish. This rarely happens but it is why nominees usually ask for payment before the creditors meeting.

Once voting has come to an end, the nominee will state that the proposal has been agreed (if majority vote for) and all modifications and reports will be sent to creditors. The document is filed at court and the interim order is lifted (usually one or two weeks after the meeting).

It is then up to the nominee to supervise the arrangement between the creditors and sole trader over the term of agreed years. Information must be reported to the creditors during the IVA and payments will be made accordingly.

The deal will propose that a certain amount of money is paid into a trust account held by the supervisor over a period of time to be agreed. If for example you agree to pay £5,000 a year for the next five years, £25,000 will be paid in.

We hope that this guide has been useful for you and that it answers a lot of questions. IVAs are very simple tools in principle but with every case being different we cannot give answers to all questions in this guide. So, please feel free to call us now on 0800 9700539 or e-mail us at info@ksagroup.co.uk to answer your specific business or personal debt problems. We are happy to help and will not charge for this advice.