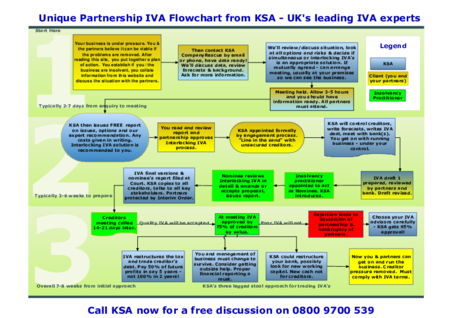 A guide to the Individual Voluntary Arrangement (IVA) for partners

An individual voluntary arrangement is a formal deal between the individual (debtor) and his or her creditors. If the individual is in debt and can’t pay payments when they fall due, he or she is insolvent. An IVA can protect debtors against legal actions while a suitable repayment plan is put in place. See the three tests for insolvency here.

An IVA can also help if the business is struggling with cashflow and creditors cannot be paid on time. Having an opportunity to pay back debt in a realistic time-frame lets the individual concentrate on running the business and is infinitely better than bankruptcy

When can an IVA be used?

If the individual’s business is a sole tradership or partnership and it is viable, an IVA is the best option for the business to continue. If there are any disposable assets, these can be sold (often at a better value) in an IVA to cover debt that is owed.

If the business isn't viable, it should be closed as soon as possible and bankruptcy initiated. Occasionally where the business is closed, a deal between the individual and the creditors can be reached but this would usually mean disposal and liquidation of assets.

A guide to IVAs

View our IVA flowchart for a step-by-step guide to the process.

When running a small business, partners can often struggle financially for a number of reasons. The business could be under capitalised or it may be difficult to get suitable finance. If large contracts are lost, this can be put immense pressure on cashflow.

Once things start to get out of control, it can be a lot harder to manage and run the business because there is so much ‘firefighting’ to do. By this, we mean time spent dealing with creditors and resolving problems rather than concentrating on strategies and improving profits. This can often lead to further problems putting the business at risk of closing. In the event of insolvency, partners can be made personally liable for the partnership’s debt. This can lead to bankruptcy of the individuals involved.

As mentioned above, an IVA is a deal between the individual in debt and the creditor and usually lasts between three and five years. The arrangement can protect the debtor against legal actions and allow him or her to pay back debt from future profits.

Advantages of the IVA mechanism

In summary, the debtor will repay what is affordable in say 5 years - this may be less than all of the debt.

Disadvantages of the IVA mechanism

If you have any further questions please see our IVA FAQs and the IVA flowchart.

If you would like to go into an IVA, the first thing you should do is put together a list of all of your creditors, both current and future ones.

You then need to make a list of all your assets and their values. If you aren’t sure how much they are worth, give estimates by comparing similar assets or goods online or in brochures etc. Don’t worry too much about getting professional valuations.

It’s vital you review all aspects of the business to see whether it is viable going forward. Our marketing guide may help you with this. Would you consider a restructure and is there enough business to be profitable?

If problems can be resolved and there is a chance for the business to be viable, an IVA is worth considering. If you would like more information about IVAs, you can contact us on 0800 9700539. We can discuss all of the above referring to your specific situation, free of charge.

If the IVA is to go ahead, you will need to appoint a nominee (usually a licensed insolvency practitioner) to handle your case. An advisor can help prepare a proposal, deal with creditors and assist you with collecting all the information you need to go forward, however you will need a nominee too as legalities require a licensed insolvency practitioner to represent a case.

The nominee will review proposals and ensure creditors’ interests are maximised before putting it to the court and creditors.

It’s best to seek insolvency advice when writing the proposal as the legal process is often complicated - turnaround practitioners can prepare the proposal on your behalf if they have all the right information.
It’s then the insolvency practitioner’s job to put forward the proposal at court. Whether you write the proposal yourself or have outside help, it’s important to include realistic costs and cashflow figures without estimating large increases or future profits. Also, remember you are not out of the woods just yet and the next year will probably be tough.

Ensure you don’t commit to making large payments, we usually do not recommend you pay out more than £12,000 in the first year. Repayments must of course, be affordable.

In the proposal, there should be details of the current financial situation and how the business became insolvent, known as a statement of affairs (SOFA). This statement should also include the outcomes of an IVA if it was successful. There should also be an outline of the arrangement’s structure, with information showing how creditors will be repaid and how much they will receive over the number of years.

The proposal and SOFA will then be filed at court, allowing a formal interim order to be applied. This will protect the individual from the time the proposal is filed to the day of the creditor’s meeting. Essentially, it means creditors cannot issue any legal action, like bankruptcy, without getting permission from the court. All actions by bailiffs or sheriffs are stayed (frozen).

Applying for an interim order

Once the proposal is sent to every creditor, a creditors meeting will be called.  The meeting can only be held from 14 days after the proposal has been received by creditors (date of the receipt). This gives creditors time to make amendments and put forward any objections.

Nowadays there is generally no actual creditors meeting it is usually deemed consent or a virtual (telephone) meeting. Before or at the virtual meeting, creditors can question the proposal, the debtor and the chairman (who is typically the nominee) about the contents of the proposal. It is also possible for them to modify the proposal as they see fit. Provided that a majority of 75% of the creditors agree with the modifications these can be adopted into the document and become part of the proposal going forward.

Modifications typically include ensuring that the debtor and his partners IVA  repays the amount agreed but also pays all future debts on time such as the tax due and VAT. Where a creditor makes a modification that is onerous or would not be in the interest of the debtors or the other creditors it would be rejected by the chairman unless sufficient majority are in favour of this. Ultimately the debtor can decide not to go ahead with the IVA, but to use bankruptcy. This is rare but is possible.

Voting at a creditors meeting

Voting is an area that raises lots of concerns and questions from debtors to ourselves and one which is often confusing. Usually creditors send their votes to the IVA nominee in advance of the decision making process (creditors meeting).

Put simply, provided a majority of creditors over three-quarters votes to support the proposal as discussed, proposed and modified then the proposal is accepted.

All the debt of the creditors is added up and each creditor has a vote according to the amount of money he or she is due by or from the debtor. Please see the example below:

Example of Voting at an IVA Creditors Meeting

"Being bound" means that the creditor may not take legal action to recover the debts due to the creditor: whether they supported the proposal or not. However, and this is important, all future debts must be paid to normal terms.

It is possible for the creditors to replace the nominated supervisor with another insolvency practitioner. Again this is rare but does happen on occasion. Therefore typically the nominee will want his fees paid before this creditors meeting!

What happens after the Creditors meeting?

After the voting has concluded, the chairman will typically close the meeting by saying that the proposal has been agreed and that all creditors will be sent any modifications and a chairman's report. This document is filed at court and the interim order is removed usually within a week or two of the creditors meeting.

The deal will propose that a certain amount of money is paid into a trust account held by the supervisor over a period of time to be agreed. If for example you agree to pay £5,000 a year for the next five years, £25,000 will be paid in.

If you're interested in the IVA route, call us on 08009700539 for initial free advice and one of our corporate advisors can talk through the process.