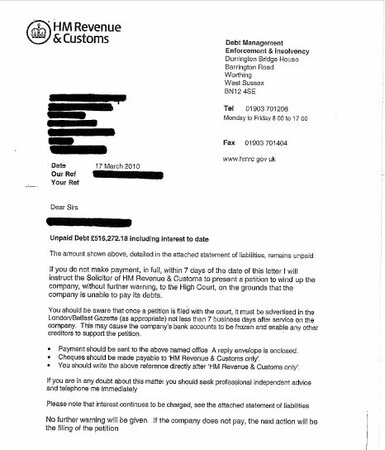 I have received a warning letter from HMRC threatening a winding up petition. What now?

HMRC Warning Letter of a Winding Up Petition

You will receive an HMRC 21 day warning letter if you are late with your tax payments and VAT and PAYE remains unpaid. It is designed to lead you to a negotiation for payment of the debt. The letter itself states that if the payment isn't made within 21 days from the date of the letter, the Solicitor of HM Revenue & Customs will present a petition to the High Court to wind up the company due to its insolvency or start other legal actions.  This is in effect, a letter before action. Attached to the letter will be a statement of liabilities outlining the debts this warning letter covers. What is HMRC likely to do?

They have a number of aggressive debt collection tools available:

You must act quickly to rectify these issues as the petition must be advertised in the London/Belfast Gazette within 21 business days of being issued. This can lead to the company's bank accounts being frozen and other creditors supporting the petition, therefore making it harder for the company to be salvaged, as more organisations need to be paid.

What should I do if I can't pay?

First things first, don't just ignore the letter - HMRC will automatically take action if they don't receive a response within 21 days. The ideal way to solve this issue is to pay the debt. However, many companies are not in a position to do so. To avoid this, there is a great solution called a Company Voluntary Arrangement (CVA). A CVA is simply a deal between the insolvent company and its creditors; this deal places a legal ring fence, called a moratorium, around the company and stops creditors attacking the company. It allows a viable but struggling company to repay some, or all, of its historic debts out of future profits, over a period of time to be agreed.

Directors stay in control of the company, stopping legal actions like HMRC winding up petitions, if you use a quality, experienced advisor for support, such as us at KSA.

So what can HMRC do to collect its tax arrears?

Visit our page on creditors legal actions for definitions and advice for all the above.

The most important thing is really not to ignore the letter. If HMRC say they will take action in 21 days they usually will.