What is an HMRC Notice Of Enforcement 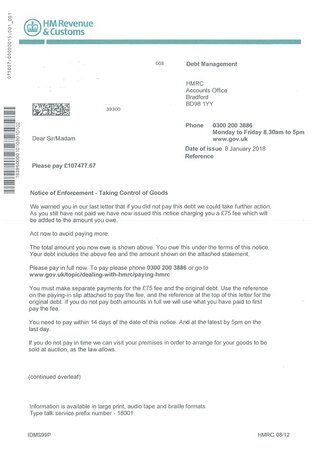 What is a Warning Notice of Enforcement by HMRC?

You will have received a warning of enforcement letter because you are late in paying your taxes to HMRC.  It is likely that you or your business have had a time to pay deal but have failed to keep up the payments.  HMRC have lost patience.  This warning is usually sent after a field officer has visited your premises. HMRC has the power to take control of your goods and sell them at auction in settlement of an unpaid tax bill.

Who can use distraint?

Any creditor has the power to serve a Notice of Enforcement if they obtain a court order. HMRC or landlords do not need a court order, however they must still obey strict regulations to retrieve debt.

If you owe taxes, the first step is usually a visit by locally based HMRC officer whose initial purpose is to check the address and make contact. After, this visit HMRC may serve a notice and allow seven clear working days for the debtor to pay. If this is not paid in the time-frame, the HMRC officer/enforcement agent can visit the premises and take control of the goods with a Controlled Goods Agreement (CGA).

This is where an HMRC officer has visited your premises having served a notice. He/she has given seven days notice to pay back the debt, however if it hasn't been paid, the officer can visit the premises and take control of the goods. If the CGA is signed, the debtor then has another seven days notice to make payment. Goods can be removed and then sold if payment has not been made. They can force their way into commercial premises but not residential or semi mixed use premises. They cannot climb in the window. They must use normal mode of entry.

Effectively, if you do not reach a deal or pay in full the field officer can remove and sell the assets in 7 days. To sell the assets, after they are covered by a CGA is a criminal offence. The debtor when signing a CGA agrees to the EA/officer revisiting at any time to inspect or remove the goods.

Threats of taking control of goods should not be ignored. KSA Group is expecting a sharp increase in the number of legal actions against businesses as they seek to recoup tax following the pandemic.

If you do not agree that you owe the tax demanded, you should tell the HMRC officer, but you will find that they are in a non-negotiable position once on the premises.

So, if you have a legal threat or have been visited by an HMRC officer , then you must ACT. In the event that the business is not viable going forward call us and we can put the company into liquidation quickly and lower the risk of personal liability.

What Should I Do When The HMRC Officer Turns Up?

Alternatively, if the you feel you can pay the debt and have a viable business but need more time to put a rescue plan together then we can help. Perhaps a company voluntary arrangement where you agree to pay off a proportion of the debt over a period of 3-5 years can be used. There are other options such as administration. Give us a call and we will take you through ALL the options free of charge and with a friendly attitude.

Note that a notice of liquidation or a notice of intention to appoint administrators can halt proceedings and can stop goods being removed.

It is not too late to act even if the company has had a Notice of Enforcement served! The business can be rescued. Phone us to ask how 0800 9700539

For a little more on HMRC and their power of distraint to take control of goods, read their PDF Guide