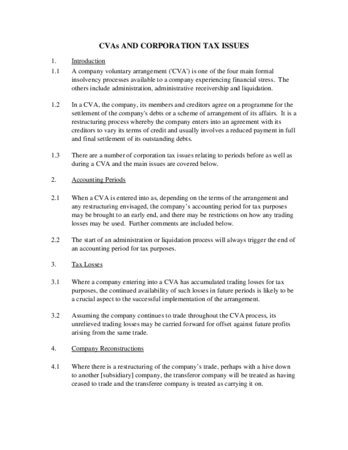 If we write off debts after a CVA, is the debt reduction a taxable gain or subject to tax in any way?

When a company proposes a CVA to its creditors the norm is for some of the debt to be compounded (or reduced). So typically the CVA may pay 30p in £1 over 5 years or so. What happens to the 70p? This is written off, usually on completion of the CVA scheme. Of course this sharply improves the balance sheet and working capital of the company.

Debts written off in Company Voluntary Arrangements are not subject to tax. Under s144 Finance Act 1994 any debts that are written off as a result of a properly agreed company voluntary arrangement are not subject to taxation. This was by s74 ICTA 1988 (to effectively allow relief for debits on the release of debts where the creditor released it as part of a statutory insolvency arrangement, as defined) and s94 (to prevent a credit being taxed where the release was part of a statutory insolvency arrangement).

The relevant statutory provisions for the release of debts under a statutory insolvency arrangement will depend upon whether the debt is deemed to have been a part of a loan relationship.

The definition of statutory insolvency arrangement is in s1319 CTA 2009, which applies for the purposes of the Act. These include CVAs

Thus, the debt representing the written off 70p in the example above would become reserve revenue.

(1) In the Taxes Act 1988, in section 74 (general rules as to deductions not allowable), for paragraph (j) (debts not allowable except in certain circumstances) there shall be substituted

(j) any debts except

(ii) a debt or part of a debt released by the creditor wholly and exclusively for the purposes of his trade, profession or vocation as part of a relevant arrangement or compromise; and

(iii) a doubtful debt to the extent estimated to be bad, meaning, in the case of the bankruptcy or insolvency of the debtor, the debt except to the extent that any amount may reasonably be expected to be received on the debt;.

(a) in section 94 (debts deducted and subsequently released) after the word released where it first occurs, and

(b) in section 103(4)(b) (debts deducted before, but released after, discontinuance of trade, etc.) after the word released,

there shall be inserted otherwise than as part of a relevant arrangement or compromise.

(2) In subsection (1) above relevant arrangement or compromise has the same meaning as in section 74.

(4A) In subsection (4)(b) above relevant arrangement or compromise has the same meaning as in section 74.

(6) Subsection (1) above shall have effect, for the purposes of determining (in computing the amount of profits or gains to be charged under Case I or Case II of Schedule D) whether any sum should be deducted in respect of any debt, in relation to debts

(b) released as part of

(c) estimated to be bad,

if the proof, release or estimation occurs on or after 30th November 1993.